These are my recollections of a number of text adventures of note.

I have omitted text adventures that I consider "classics", and have put those in another list: Classic Text Adventures.

It also may help to read Perspective on Text Adventures first, especially if you have trouble following my perspective on text adventures.

You'll note I'm not particularly adept at actually solving these things. In fact, with only one exception, when I have gotten to the end of a game, it was with the help of hints from friends, or a clues booklet, or a walkthrough. I don't feel bad about this, because when I've been stuck, I've usually been stuck for an awfully long time — and, in the end, text adventures are meant to be played!

These are presented in roughly the order I encountered them in.

I found this on a Commodore 64 "Club Disk", but the program was corrupted and would always crash at certain spots. Later in life, I found an archived version on the Internet which seemed to be slightly different. ISTR the first version I played had a voice saying "plugh" (yes, like Colossal Cave) in the cavern. Was it a modified version of this? Was it an independent conversion to C64? I'm not sure.

An interesting game, although parts are probably borderline politically incorrect at this point in history (but really, the same can be said for the original Get Smart.) As text adventures go, it's not fantastic, but it's alright. It's reminiscent of Scott Adams' adventures a bit.

To date, I've gotten about half the possible points. I either can't remember, or never figured out, how to get the wood without getting bitten by the spider. I can deal with the viper and the alligator, but am not clear on the purpose behind either. No idea what the foul-smelling stuff or the wild dog is for... 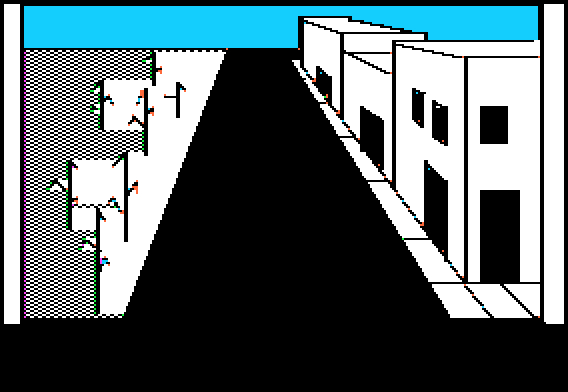 Not the best adventure game, certainly, but memorable for some reason.

I never got to the end, but pretty sure I could without too much help, if I ever found the time to go back to it.

The main thing that makes it worth playing at all, is that suit of armor that follows you around. That's all. Once you've seen that, you can stop.

Whatever other merits this game may or may not have, the main feature is the Oozlybub, a creature which has popped up in a few other places in artistic endeavours in my life, such as being part of the name of my programming language Oozlybub and Murphy. 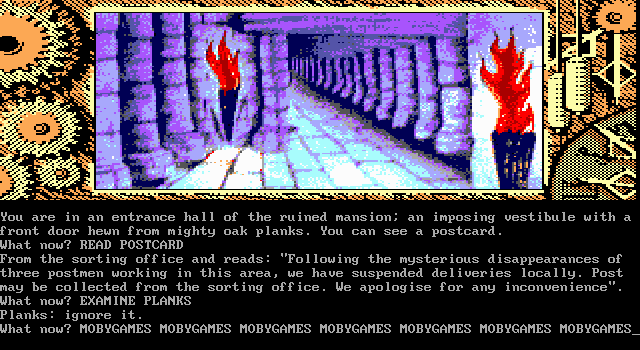 I first encountered this on the Amiga 500.

It's actually a trilogy of three games: Lords of Time, Red Moon, and Price of Magik.

Lords of Time, which is treasure-oriented, seemed pretty well put together (although anyone familiar with Doctor Who might have a hard time re-conceiving "the Timelords" as being the outright evil bad guys.)

Price of Magik is quite good, at least in principle — I like that you start off with 100% sanity, but gradually lose it. But some of the other game mechanics, like the combat system, are less well implemented and actually kind of annoying.

Red Moon seemed kind of weak. Price of Magik is clearly the sequel to it (they share a spell system, where specific objects are required as "foci" for casting specific spells) while Lords of Time is a different game completely.

All three games have a lot of locations in them. Apparently this is something Level 9 was known for.

Part of what makes the trilogy better than the individual games is, actually, the graphics. Individual locations don't have individual pictures, but they do have representative pictures, which generally match the mood (though not always.)

Highlights of these games, for me, were the multitude of locations, the graphics (at least in the Amiga version,) and watching yourself incrementally losing your sanity (at least according to a stat.)

This was apparently a demo for The Graphic Adventure Creator, but it stands on its own as a game, although perhaps not the best one.

I'm proud to say that I solved this with no hints or walkthroughs, although I should add, it's not a particularly difficult game.

Note that this is not the same game as the 1999 game by Laura Knauth with the same name.

If you're considering playing this one, well, maybe you shouldn't waste your time on it, but it has its moments. The 4th-wall-breaking announcement of the name of the game over the radio at the very beginning is kind of eerie. Also, there's a WOMPA! in it. Yes, including the exclamation point.

The Secret of St. Bride's

Unlike most of the others on this list, I only came across this game in the 21st century, and have never gotten very far in it. I will probably end up consulting a walkthrough, if I ever find the time to go back to it.

Intriguing, but perhaps the conditions under which it was written are more intruiging still; see GAMES LESSONS for one reporter's report.

It was written in, and reflects, an actual environment where grown women play-acted being schoolchildren in an intentionally anachronistic setting.

In fact, I did a little research and found that the School of St. Bride's is apparently linked to the Aristasians, which makes total sense, if you know something about the Aristasians; I just didn't make the connection until reading that history.

So you could try playing this one if you want to play the first, and possibly only, Aristasian text adventure. I mean it's not a terrible game (although the parser is pretty bad and some of the puzzles involve guessing at the parser) but the main draw for anyone who's not an Aristasian themself would seem to be historical.