I originally compiled this list (as a list of my favourite games) because I figured that if Wouter could have such a page, then I could too. I've also been told that I have good taste in video games.

It has since become somewhat generalized from being a list of favourite games to a list of games of note.

Gameplay generally counts more than the quality of the graphics or sound effects or music, but the latter elements sometimes have their part to play in making a really notable game. "Realism" of the game is generally not a factor.

These are ordered from most impressive to me to least impressive. Note, however, that the order and contents of this list are subject to change.

This list is mostly arcade games. Games for home systems have intentionally been offloaded to articles dedicated to the particular system: 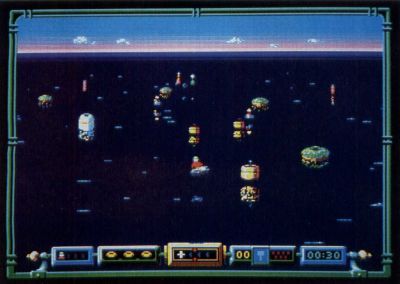 Quite possibly the cutest game ever.

Not actually a shoot-'em-up, as the author pointed out in his interview for Halcyon Days:

I like it because it's unique, the gameplay is simple but infinitely variable, and for me the characters really come to life. Some people mistook it for a shooter at the time, but it's really more like a game of Blitzkrieg Chess. If you just start blasting you lose immediately. Each kind of enemy has moves it can make, and the player has his moves, but things never happen the same way twice. It's not high concept in the way that "Choplifter" is, but rather a kind of art piece. 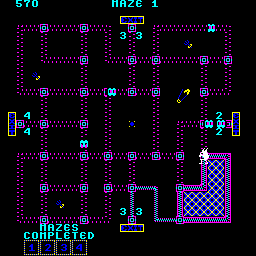 To the untrained eye, it's a ripoff of Pac-Man: fill in all the regions instead of eat all the dots. But there's something about it that sets it apart — maybe it's that the action is more frenetic and somehow smoother (if slightly buggier,) maybe it's because the strategy is different (more emphasis on getting the power-ups just to stay alive.) 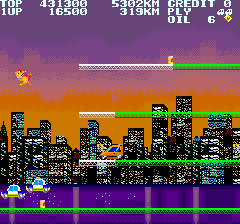 A jumping minivan? Yes, a jumping minivan. And European paddywagons. And a devil-cat-thing with a checkered flag. And a balloon that warps you to other cities. How can you not love it?

Not sure if it's truly a platformer, though. 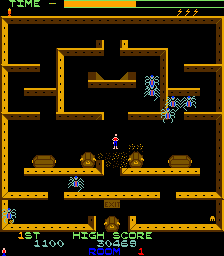 Gnarly game, but very hard. I especially liked the 3D effect on the intermediate levels with the staircases. (Even though it's awkward to control and far too easy to die on these.) The "word from our sponsor" interruptions are also quite cute.

There is something coherent and unified about the design of this game that you don't often see in other games; you get the impression that it was crafted rather than simply produced.

Well, maybe I'm overstating it a bit, but you get the idea. 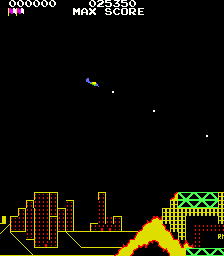 In this game, your goal is to pilot an airplane over some terrain and then through a field of obstacles — inside a maze, essentially. This is made more complicated by the fact that you can only change direction in an arc. You can also shoot out some bits of the world when they get in your way, and in fact you have to in some places.

Oh, and also, if you fly too high up, you bounce off the sky.

The original ROM images for Looping have been made available for free, non-commercial use. 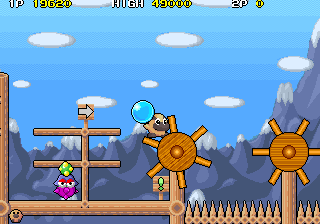 Very cute. Quite possibly a sequel or pseudo-sequel to The New Zealand Story, since you play what appears to be a platypus, and there are oblique references to TNZS (in one of the secret chambers, the platforms are arranged in the shape of the kiwi.) 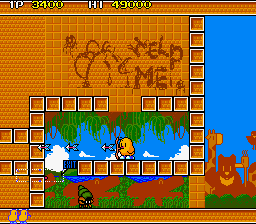 "This game is dedicated to all maze fans." However, that should not deter fans of: kiwis, archery, flying machines shaped like bears' heads, laser pistols, magical fireball-belching staffs, and the like.

Fast-paced, psychedaelic, mindless fun, like most Jeff Minter games. Basically a clone of the arcade game Robotron, but with shaggy, smelly quadrupeds. And cans of Coke. And Mandelbrot sets...

Llamatron was written for the Atari ST, but I only ever played a version for MS-DOS, and apparently this an erstaz version, although I do not recall where I read that.