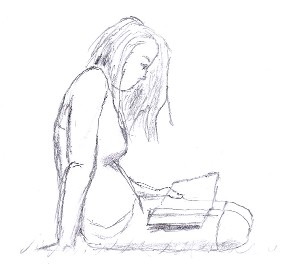 Texts. But isn't everything in Chrysoberyl a text of some sort? Yes, but those are texts about something. These are texts that stand as works on their own.

Note that concrete poetry and the like may be categorized under Texts, or Pictures, or both.

The Swallows is the name of a series of computer-generated novels, as well as the title of the first novel in the series, and the name of the program that produced them (The Swallows Engine). They were produced for NaNoGenMo 2013.

The Swallows of Summer

Swallows and Sorrows is the third novel in The Swallows series of generated novels.

Dial 'S' for Swallows is the fourth and final novel in The Swallows series of generated novels.

Nif is a novel generated for NaNoGenMo 2013. It is about a petulant child (possibly named Nif) who has just discovered palindromes. It is one long palindrome.

Nif was inspired by, and draws heavily from, Nick Montfort's "The Utterance of the Petulant Child." In fact, it is pretty much an homage to "Utterance" which attempts to turn the petulance dial up to eleven, so to speak. Its creation was also sparked by a dim memory of the life ambition of one of the characters on the terrible 80's sitcom Head of the Class, which was: to write a novel that was one long palindrome.

As if Lewis Carroll's works needed any more remixes...

With a philosophical flourish Cato hows thrimself upon his sword; I quietly shake to the tip.

Doby Mick, or, the Excessively Spoonerized Whale is a novel generated for NaNoGenMo 2014. A spoonerization algorithm was developed, which picks two words from each phrase of each sentence and swaps their initial consonant clusters. This was run on Moby Dick, to produce this novel.

3×C(21,3)+2×C(215,2)=50000: The Novel is a novel generated for NaNoGenMo 2014. The minimum word count for a NaNoGenMo novel is 50,000 words, and the question occurred: if one wanted to make a novel with exactly that many words using just combinations and/or permutations, what combinations should one pick?

A Rainy Sunday Afternoon is a novel generated for NaNoGenMo 2014. It was based on the premise that, while sometimes automata do things worthy of people (like writing a novel), sometimes people do things that are worthy of automata, too.

Hope and Remembrance is a novel generated for NaNoGenMo 2014. It is possibly the first NaNoGenMo submission which attempts to implement foreshadowing, no matter how ham-fistedly.

Threnody for Abraxas is a phantasmagoric Surrealist word/concept-painting generated for NaNoGenMo 2014.

A Time for Destiny

A Time for Destiny is a proper novel generated for NaNoGenMo 2015. It was generated by the program MARYSUE.

Legiony McLegionface is a conceptual generated novel submitted to NaNoGenMo 2017. It was awarded a green "completed" label, even though it is not clear that it deserved one.

Vanish Like: The Novel is a novel generated for NaNoGenMo 2017. The minimum word count for a NaNoGenMo novel is 50,000 words, and the question occurred: if one wanted to repeat a paragraph, but remove one word from it each time, how long should the first paragraph be so that the resulting novel would be as close as possible to 50,000 words without going under?

The Collected Works of Every Novel Generator Ever (Abridged Version)

In the spirit of those "Every X" bots on that bird site, a program to generate Every Novel Generator was written. It was then run, and the the first 50,000 words of the outputs of first N novel generators generated were collected into a generated novel titled The Collected Works of Every Novel Generator Ever (Abridged Version).

The League of Extraordinarily Dull Gentlemen

The League of Extraordinarily Dull Gentlemen is a generated novel submitted to NaNoGenMo 2017. The goal was to tell a story (a single, non-episodic story) over the course of 50,000 words. Simulation in a world described by propositions, but processed by something far simpler than a Prolog (or even Datalog)-style inference engine. The world-description was written in Samovar.

The Defeat at Procyon V

Sort of a superannuated vignette. Written in Julia 1.0.

The story isn't entirely dialogue, but it might be difficult to find the non-dialogue parts unless you read the code.

Written in Befunge-93 as a commemoration of the 25th Anniversary of Befunge.

The generated novel consists of 50,000 really lovely words in short paragraphs. You can think of it as a kind of fireworks.

What do you get when you cross a Markov chain with a regular grammar? Perhaps surprisingly, you get a Markov chain that obeys the rules of the regular grammar. You can read all about it in this write-up about this novel generator, which includes some snazzy state transition diagrams as well.

The moment I opened the dust-covered tome I could feel the noxious waves of Orientalism oozing out from it. Whither the antidote? I racked my brains for anything that might prove effective, but precious time was slipping by! I had to pick something, and fast. There was no more that I could do but to try it and hope...

The Lion, the Witches, and the Weird Road

A novel generated by running the Dissociated Parse algorithm (developed during NaNoGenMo 2021) on Frank L. Baum's The Wonderful Wizard of Oz.